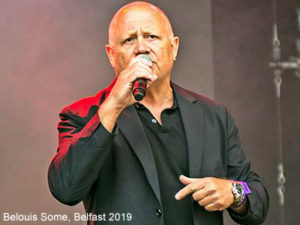 In 1982 put a band together and started playing clubs and small venues in and around London as Belouis Some.

1983 signed by Paul and Michael Berrow to Tritec Music and Parlophone (EMI Records).

Round Round (Pretty in Pink film soundtrack) produced by Bernard Edwards, recorded in L.A. (Aug 85).

Jan 1986 Imagination re-released in UK, followed by Some People.

In 1991 signed to BMG Records, album recorded and mixed in Marcus Studios London.

1995 released Let Me Love You For Tonight (written by J.Ferrer) produced by Richard Stannard and Matt Rowe.

In 2019, Belouis Some performed at the Let’s Rock 80’s summer festivals across the UK.

This error message is only visible to WordPress admins